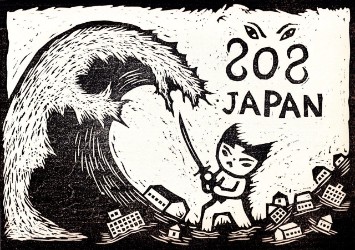 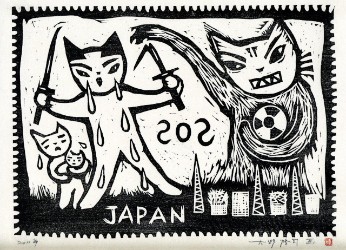 OPENING 18 NOVEMBER at 7 p.m.
Speeches by the spokesperson for culture and human rights of the Green Party Vienna, Klaus Werner-Lobo, and exhibition curator Marcello Farabegoli.

The event curated and produced by Marcello Farabegoli is a Special Project of the VIENNA ART WEEK. With the kind support of the above contributors, from Anna Jermoleaewa, Dominik Nostitz & Verein 08 and from Geiger & Partner Insurance Brokers.

BASIC CONCEPT
The project was originally conceived in connection with the woodcuts by Takashi Ohno, which will form a pillar of the exhibition.

'The cats of Tokyo have a celebrated portraitist,' Niklas Maak wrote of Takashi Ohno in a February 2011 newspaper article for the 'Frankfurter Allgemeine Sonntagszeitung'. Soon after came the devastating tsunami and nuclear disaster in Fukushima, the subject of Ohno’s woodcut series featuring his anthropomorphic cats.

Takashi Ohno's woodcuts appear regularly as illustrations in current articles in the 'Yomiuri Shimbun', with 14 million readers it is the most highly circulated newspaper in the world.

Samurai cats with the typical Chonmage hairstyle of these warriors and the Katana struggle against the tsunami and radioactivity. A threatening tsunami wave, which alludes to Hokusai's famous woodcut showcasing the great wave of Kanagawa. The wave also refers in its contours to the monster Godzilla, whose fictional awakening was significantly triggered by a nuclear test. The fact that the artist reproduces the international distress signal SOS in mirror image is a commentary on the action taken by some Japanese authorities immediately after the disasters.

Herbert Eichhorn, director of the Städtisches Kunstmuseum Spendhaus Reutlingen – a museum mainly devoted to modern woodcuts – writes about Takashi Ohno in connection with the 'Image of the Month' in June 2013: In his pages 'acts the influence of the famous woodcutter Yasunori Taninaka (1897–1946), whose works Ohno learned of at the beginning of the eighties and led him to the traditional medium of woodcut. Also striking is that tool marks are intentionally used as a design element – unusual for both the Japanese woodcut tradition and the visual language of Manga – and that prints show relief residue in the non-relief areas, for example. The artist probably borrowed this from Taninaka, who was strongly influenced by Expressionist woodcuts from the West.'

Several woodcuts for this exhibition were printed by Takashi Ohno on paper from Fukushima.

FURTHER CONTRIBUTING ARTISTS
The idea for the exhibition 'No more Fukushimas' came from Marcello Farabegoli. At his co-curated 'Salotto.Vienna' in Trieste and on other occasions, he spoke about the project and attracted great interest. In the Exhibition, contributions from the following artists will be on display:

A photo from a performance will be shown, designed by casaluce/geiger:::synusi@ for the Japanese artist Hana Usui. It is about the origin of the universe and of life as well as fundamental issues of knowledge.

A poster and video by Julius Deutschbauer (camera and editing by David Jagerhofer) on his performance with Gabriel Schöller entitled 'My mother only has two rolls of toilet paper' will be shown. This response was given to him by a friend of his from Tokyo after he asked how her family in Japan were after the Fukushima accident. The Japanese-style dressed and rouged artist builds a wall of hundreds of rolls of toilet paper, which eventually collapses ...

The photographic work of Luca Faccio bears the motto 'No more Hiroshima, No more Fukushima', which shows the mass gymnastics of the Arirang Festival in Pyongyang. In the stands, tens of thousands of contributors with different-coloured squares of cardboard form one huge image that is allegedly a reference to the North Korean nuclear policy.

Olga Georgieva was born in Bulgaria in 1986, some months after the nuclear disaster in Chernobyl. A photo from her work 'since 1986' will be shown, which the artist packed in yellow-and-black police tape – the colours which, among others, represent radioactive material labelling.

Shinshu Hida, who lives and works in the prefecture of Fukushima, will have some photographs of the natural and environmental disaster on display.

Edgar Honetschläger contributes to the film project 'Sounds of Sirens – SOS', which he produced together with Sylvia Eckermann. The open-source-project gave those affected by Fukushima the possibility to send short films to a video platform and so impart their anger, their sorrow and their fear.

Sissa Micheli designed a photographic piece specifically for the exhibition, in which she drew a map of Japan out of rice from Fukushima. The rice is free from radioactivity, according to Japanese control bodies. With this topographical piece the artist showcases the fear of the invisible threat of radioactivity spreading through the country and getting into our food.

Federico Vecchi has created a mushroom-like atomic bomb sculpture for the exhibition.

Erwin Wurm has dedicated to the exhibition a drawing from the series 'One Minute Sculptures', depicting a woman with two gherkins in her nose. Does this woman perhaps want to avoid inhaling radioactive contaminated air with the help of her gehrkins?

Speeches by the Member of Parliament & spokesperson for environment of the Green Party Christiane Brunner, the deputy head of the district Wieden Barbara Neuroth and the curator of the exhibition series 'No nore Fukushimas' Marcello Farabegoli.

The event is a cooperation between Marcello Farabegoli and Barbara Neuroth / Wiedner Grünen.

Speeches by the head of the district Thomas Blimlinger, the publicist & journalist at Ö1 (Austrian national radio station) Judith Brandner, the psychotherapist at Sigmund Freud Private University Jay W. Yamashiro and the curator of the exhibition series 'No more Fukushimas' Marcello Farabegoli.

The event is a cooperation between Marcello Farabegoli and Galerie 7. The gallery is curated by Ursula Berner und Anna Babka.