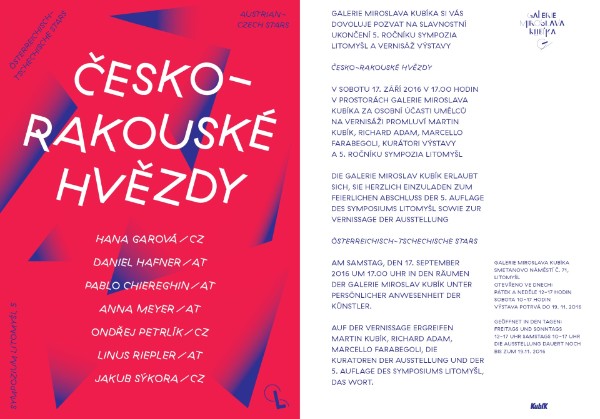 First of all I would like to thank Mirka and Martin Kubik and Barbora Futerova most warmly for their invitation to curate this exhibition together with Adam Richard, and not least to all artists for their participation in the project.

Without an exhibition theme and without knowing which Czech artists Adam Richard would
choose, it has been a challenge for me to find four Austrian artists for the symposium and the exhibition. As I am not Austrian myself but was born near Bologna, grew up in Bolzano in South Tyrol, and then chose Vienna as a place to live, I have not limited myself to artists who were born in Austria. Most of the 'Austrian' artists I know live in Vienna, and, typically, Viennese citizens are a mixture from many countries and cultures of this world. Further, it was also important for me to present at Litomyšl artists who are represented by some of Vienna’s leading art galleries.

So let’s chivalrously start with Anna Meyer, even if she, a modern woman and author of an exhibition entitled Futur-Feminism, would probably have nothing against my starting with a man. I admit that I am rather familiar with more 'silent' and less figurative positions in painting, but in the sense of a coincidentia oppositorum, her work fascinates me in particular, and I thought that Anna Meyer would in fact fit in excellently with this exhibition. This is indeed the case, given the predominantly non-figurative painterly positions of the Czech and Slovak artists. When I first saw her works I thought they were painted in acrylic. Anna explained to me then that she used oil paints deliberately in such a defamiliarising way in order to achieve a more modern and contemporary effect. Her groups of works are frequently linked to sojourns abroad, such as the works exhibited here, which reference her stays in Istanbul in 2012 and 2013 and the protests in Taksim Square. Of course this also holds true for her works in oil on Perspex, which she painted in Litomyšl and which speak for themselves thanks to their inscriptions and symbols. In these new works, the artist especially juxtaposes today’s surveillance and control through social networks and former Communist intelligence.

To a certain degree, Linus Riepler’s works are also figurative, but they are entirely devoid of political content. They rather take us to a fairy-tale universe instead. There are several works by Linus Riepler on display here, such as the particularly poetic and tragically comic work World in a Jar, which he conceived for the exhibition Perpetuum Mobile, a show staged in the Garage – Kunst Haus Wien / Museum Hundertwasser and which I curated for Vienna Art Week in 2015. In his little work for this exhibition, Piece of Evidence, he follows the same concept as in many of his other projects. A found object becomes the starting point for him. In Litomyšl, he found the yellow cap of a spray can near a graffiti wall. The colour of the cap seemed to fit parts of the graffiti, so Linus assumed that the cap had been lost by the person who had created the graffiti. His work shows an exact three-dimensional model of the very place where he found the cap. It also contains some photos of the graffiti and of the location, as well as related drawings and the cap itself.

Let me now continue with my compatriot Pablo Chiereghin. He has subsumed his works exhibited at Galerie Miroslava Kubíka under the title Is it all so perfect? This title came to his mind after a week at the Litomyšl symposium. He had been asking around about how people live in this wonderful city of 10,000 inhabitants with a UNESCO castle, a magnificent historical centre, museums, public parks, many galleries, a hospital, large factories, sport centres, a prize-winning swimming pool, and new and important architectural buildings. All the replies he received when asking his questions were elusive. Nobody really complained about anything apart from a contemporary art sculpture, a deformed bus placed in the main park. So he decided to infiltrate this perfect reality project of Litomyšl, where social and financial problems certainly do exist and where freedom and control overlap in his sound installation: by means of ten loudspeakers distributed across the city, mixed recordings of demonstrations from different countries will be broadcast at regular intervals over the course of the exhibition – in order to open a window on other people’s lives. As you can see from the contract that Pablo Chiereghin concluded with Mr. Kubik and which is also on view, the artist has not spared the gallery owner his humorous infiltrations.

And, dulcis in fundo, I’ve now arrived at a technique I love most: drawing. Yet it is not traditional drawing, for Daniel Hafner combines it with the natural sciences, nature, and computer technology. On the floor of one of the rooms in the exhibition you can see three so-called 'studies in motion' that were conceived in Litomyšl. The artist drew a group of individual lines on the computer screen, which he subsequently multiplied, overlapped, scaled, and shifted. This has resulted in new groups of drawings deviating from the basic form, which he then transferred to the final medium of paper with a felt-tip pen. For the series Air Records, adhesive picture supports were exposed to the air outdoors in certain places over certain periods of time in order to collect and capture all of the particles hitting the surface. In the exhibition, you can thus compare the air of Vienna with that of Litomyšl. The series Rain Momentums shows the great variety of possible patterns rain may leave behind on a surface. The filigree Mosquito Drawings are his most traditional and most gestural works, in which the artist followed individual mosquitos in a swarm without averting his eyes while recording their trajectories on paper.

About the participating artists from Austria:

Pablo Chiereghin was born 1977 in Italy. He graduated in communication studies in Bologna and postgraduate in photography from Central St. Martin’s University of Arts in London. He has lived and worked in Vienna since 2008. He works with site-specific projects based on social and political dynamics. His actions, performances, and interventions take place in reality. His practice finds fertile ground where behaviours and rules cause entropy and discrepancies.
Pablo Chiereghin has appeared at, among other places, andata.ritorno Gallery in Geneva, CCC Strozzina in Florence, das weisse haus in Vienna, Galerie Laurence Bernard in Geneva, Kunst Haus Wien, Künstlerhaus in Vienna, Kunstraum Niederoesterreich in Vienna, Micamera Gallery in Milan, the National Archaeological Museum of Adria, and Trieste Contemporanea. www.pablochiereghin.com

Daniel Hafner was born 1979 in Austria. He lives and works in Vienna. His artistic practice includes various creative fields, ranging from visual art to performance and sound art. He studied at the Academy of Fine Arts, Vienna, where he was involved in the Digital Media and Art in Public Space departments. During numerous years assisting in multimedia artists’ studios – in senior research and production roles – he became an expert in developing unique techniques integral to artist studio practices. Throughout Hafner’s artistic practice is the investigation of site-specific and life-science themes – luring participants into a subtle reflection of the variable possibilities of reality. Selected solo and group exhibitions include ACF Bratislava, Frederick KieslerFoundation in Vienna, Kunsthaus Graz, and Kunsthalle Košice. www.danielhafner.com

Anna Meyer was born 1964 in Switzerland, she studied at Schule für Gestaltung in Lucerne and Zurich and has lived and worked in Vienna since 1986. Her realistic paintings deal with social and political topics mirrored in urban settings and with the digitalisation of society – Internet, smartphones, iPads, drones, Pokemoons, etc. – and its influence on our civilisation. Emotional and political relationships get transformed into paintings and models.
Anna Meyer is represented by Krobath Wien and has had exhibitions at, among other places, Arbeiterkammer Wien, Galerie Krobath Berlin | Wien, GfzK Leipzig, Kunstbunker in Nuremberg, Kunstverein Bonn, Kunstverein Graz, Kunstverein Salzburg, Kunstverein Schaffhausen, Maçka Modern Art Gallery in Istanbul, Museum Kartause Ittingen, Museum Morsbroich in Leverkusen, and Städtische Galerie Nordhorn as well as in the cities of Györ, Belgrade, and Tokyo. www.annameyer.at

Linus Riepler was born 1984 in Austria. He lives and works in Vienna. He graduated from the Academy of Fine Arts Vienna in 2009. In his artistic practice, Linus Riepler creates scenes. Sometimes they become extensive interior installations; other times they appear as dioramas inside small display boxes. Storytelling is a big part of his work.
Linus Riepler is represented by Galerie Krinzinger in Vienna and has shown his works in several solo and group exhibitions, including 15. Biennale de la Mediterranée in Thessaloniki, Kunst Haus Wien, MUSA in Vienna, OÖ Kunstverein in Linz, and Sightfenster (with Galerie Warhus Rittershaus) in Cologne. www.linusriepler.eu