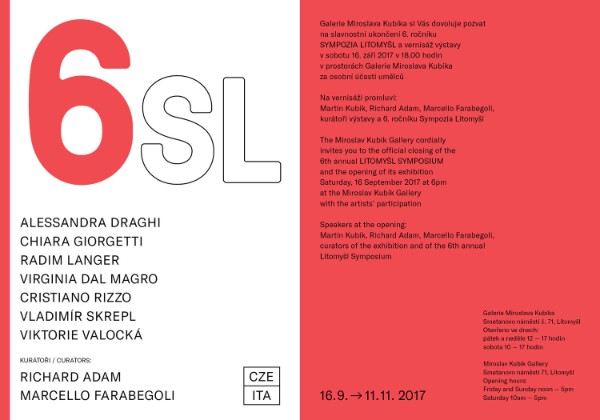 Pictures of the exhibition (Italian section)

Galerie Miroslava Kubíka has organized the 6th Litomyšl Symposium. It features three Czech artists selected by the curator Richard Adam and four Italian artists selected by myself, Marcello Farabegoli. Consequently, I curated and designed the Italian section of the exhibition and Richard Adam the Czech one. The Czech artists are all based in Prague. The artist Vladimir Skrepl is professor of painting at the Academy of Fine Arts in Prague, where Viktorie Valocka was a student. Radim Langer graduated at the Academy of Arts, Architecture, and Design. The Italian artists are rooted in Milan, an internationally renowned city for design, fashion, finance and business, but also home to one of the most active contemporary art scenes in Italy. The artist Chiara Giorgetti is professor of print media at the Academy of Fine Arts Brera in Milan, where Virginia Dal Magro, Alessandra Draghi and Cristiano Rizzo were all students. The exhibit includes a wide spectrum of images, mediums, methods, and ranges in color so that at the first glance the artists seem highly different in their research and art pursuits. But taking a closer look at the Italian section of the exhibit we can find similar historical references and analogous reflections on life, memories, and the languages of art. As well, the recurrent variety of art processes is almost a ritual for them. They all move between many technical processes that consist of multiple and complex passages and stratifications from printmaking to painting, analogic and digital photography, cyanotype, drawing, etc. The Czech section of the exhibit is more heterogeneous, mostly concentrated on painting and demonstrates some of the more interesting artistic movements of the Czech Republic: from the well-known expressive works by Skrepl, to the more conceptual approach by Langer, and the mostly introverted and poetic language by Valocka.

The atmosphere is almost Mittel-european. There are visual and cultural backgrounds from Europe to Asia, and it’s perceivable in the rooms of the exhibition. There is a wide excursion between methods, materials, and ideas that points out the consciousness of the contemporary artist.

Chiara Giorgetti's artwork revolves around the topics of communication, language, the emptiness in a technology-dominated society, and the story of images and human relations. She presents a series of related images: objects, texts, and nature paysages in a secluded study which aims to undermine the flamboyant and flashy trend of the leading communication. 'A series is like a sentence,' she states, 'you have a syntax and a sequence of meanings' . But if making a series of weak, properly similar images is quite easy, making a series of strong single images which, like sentences, can express a thought (semantic component) and a structured visual grammar (syntactic/morphological component) can be very complicated. The silence’s aura and the motionless picture catalyzes our attention in Day mise en scene (digital print mounted on aluminium) where faded flowers are removed from the dominant role of carrier of joy, beauty, and perfume and become emblematic of life’s transiency. In Litomyšl she worked on the achromatic color series Lost items and repositioning, as well she developed Summer glacier. On the big linien tissue, Far from where, in which an elapsed time stratification reflects on time and memory through signs and photographic shots. All artworks are a complex combinations of systems where the use of digital and analogic photography are 'inverted'; the analog images are elaborated with painting and drawing after diverse working phases in the darkroom, then with scanner and digital print, sometimes as in Lost Items are padded in a 3D velvet 'false unfinished' ironic image. On the contrary, the digital images are not altered in 'Photoshop'. In Litomyšl Giorgetti worked on sets or captured theatrical incomplete situations in everyday life, suggesting a sort of faded, empty Japanese atmosphere.

The sense of temporary and fragmentation is strongly felt by Virginia Dal Magro who is ever focused on memory and on its mechanism where fragments and their details become abstractions. The aim is the breakup of reality to create an altered version once again able show everyday life but under a new point of view. The work process is based on reprinting and reworking images, and with this system she sets up new personal archives rethinking personal histories. Through an unremitting process which involves various printing techniques, she uses the darkroom, a 'safe place for mutation', like a modern alchemist. In Litomyšl she worked on the serie Archipelago using the cyanotype, an old photographic method which uses daylight (or UV light) to impress images. Every picture is isolated and fragmented. On the wall, the installation Archipelago of memories seems to recreate a New World’s map made up of memories which are in continuous transformation. In fact, the colors of the map will change during the exhibition because of their chemical composition. The series on Japanese paper combines the cyanotype system with gum print, a particular print method on the calcographic press.

The exhibition continues with artworks by Cristiano Rizzo who focuses on the idea of an untroubled, inner peaceful place. Looking at his research we are captured by the slight sign system he uses to communicate to the observer in a poetic way, a gentle talk, a whisper almost impalpable like the sheets of paper he sometimes uses. The central motif for Rizzo is 'home', in the broadest sense of the word, as an archetypal vehicle of memory that acts as a shelter and as a space of isolation and self-analysis. Home can be an existential condition, he believes, as the hortus conclusus , the gothic garden that ideally represented the space of reflection and concentration, the space of intimacy and recollection par excellence . The residency in Litomyšl is brief and Rizzo chose to widen his study on local materials. He printed with the baren (a very particular circular Japanese instrument for manual printing) some floral shapes on linoleum. The never ending Botanical studies became research for something lost, perhaps the fragmentation of life, or the melancholy of life expressed by the reduced and simplified natural outlines. In this process, the floral shapes gain an anthropomorphic appearance and value. The artist’s book Anemone talks about the Metamorphosis of Ovid with beautiful and sensitive pages realized in monotypes and etchings on Hahnemühle paper.

Alessandra Draghi pays attention toward the outside world reinventing it. Through the manipulation of visual materials accumulated over time, Draghi creates new scenes starting from visited and lived places. The photographic language is the pretext for creating new meanings, the intimate objects are manipulated, transformed and embedded in different contexts that play with new sizes, and their own names. So the series with pills and shells (digital print on cotton paper) in Turno di notte (Night shift), Luna di miele (Honeymoon) or in Centro massaggi (Massage center) allude with the title to funny, ironic situations, shifting the meaning of the image to another context. The everyday objects get a 'new life' where the artist acts with reality and fiction creating organized sets that allude to her past and present life experiences as well. 'Can you recognize if it is true or not?' She seems to ask this question, and in this way an ordinary journey becomes the pretext for extraordinary digressions. In Litomyšl she worked on Era una conchiglia bellissima (It was beautiful shell; obscure room ), as well on the series placed under the window named Under my skin (cyanotype printed on an cromatic palette from silver to gold papers). The Polskyseries (analog photos on cotton paper) on the floor tells about a 'cinematographic reportage' made during a travel across Poland. The Polskyimages look anonymous and universal at the same time, only reading the title and the word 'Cracovia' can we place them geographically.

About the participating artists from Italy:

Chiara Giorgetti is professor of print media at the Academy of Fine Arts Brera in Milan. Since the 1990s she has participated in international exhibitions, lectures, workshops and collaborated with magazines. From 2001 to 2011 she managed Printshow.it, a webzine which connected, for the first time in Italy, the printmaking scene with the practice of contemporary art. Since 2012 she has been co-curator of the international art/poetry project da>verso. Her artwork spans a wide variety of media and revolves around communication, human powerlessness, and our relationship with each other in a technology-dominated environment. She has a proxemics approach to the recurring themes of human history, of inside reality and outside perception, and of detachment and disregard for the unnecessary. The images are ordinary and absurd at the same time: familiar objects or a vague remote forest where the use of written text is constant. The words appear as a flow of atemporal consciousness, sometimes with an ethical value. https://chiaragiorgetti.wordpress.com/

Virginia Dal Magro holds a bachelor’s degree in fine arts and has presented her work in several group exhibitions in Budapest, London, Milan, Rome, Tallinn, and Tokyo. She exhibited her work at the 57° Bugatti-Segantini contest and was a finalist of the Morlotti Prize. Her research is focused on memory, mostly on its mechanism. She analyzes the tension towards forgotten everyday memories, meditating on the misrepresented images that time can hide under the layers of the past. Her series resemble a large part of her art investigation: fragments of images of a personal archive that want to depict the external form of people and places, that normally remain unnoticed. The isolated and fragmented pictures are later recomposed to create new identities and possible worlds. www.virginiadalmagro.com

Alessandra Draghi graduated from the Academy of Fine Arts Brera in Milan, where she also runs a graphic and photo studio. She has exhibited in Italy and was assistant and coordinator to such international artists and curators as Armin Linke, Alek O., Matteo Rubbi, Atos Collura, and Cloe Piccoli. She works following a creative process that consists of different passages and stratifications. Draghi incorporates and mixes different techniques, such as traditional darkroom, analogue and digital photography, cyanotype and scanned images, painting and drawing, and always in a continuous selection of new subjects. The photographic images reflect the creative and visual process within the medium of photography and about its relationship with people. Her research conceptually explores the medium’s language while the creative process is contaminated with many methods, systems, and the manipulated materials are united by the experience of lived places.

Cristiano Rizzo studied printmaking at the Academy of Fine Arts Brera in Milan, where in 2015 he worked as an assistant professor of engraving. Rizzo has participated in various exhibitions in Italy, China, and Japan. He started his artworks by analyzing the hortus conclusus, the gothic garden that ideally represented the space of reflection and concentration, a spirit’s garden, a metaphor of human existence that simultaneously separates and protects. The study revolves around the garden’s protagonists: the flowers and nature’s forms. The research explores this intimate place, a sort of escape from the outside world, with references to the symbolism and mythology of the past. Printmaking allows him to create flat images by working in layers until the desired shade is achieved. The use of “poor materials” and chosen working process allows him to create images with a wide margin of interpretation. Common subjects make it possible to set up an imaginary and naïf universe in a quiet and personal dimension.