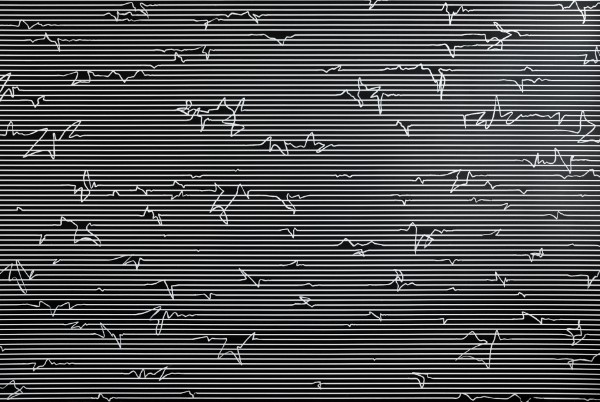 Driven by a gently anarchist vein, Esther Stocker shakes the foundations of the grid: breaking through the mental fence of Euclidean geometry, she opens up new spaces and liberated systems of order for us. Advancing into the space of the psyche, Guido Kucsko wonders if our fear for freedom is in fact also a fear of freedom. How much freedom should we give up in order to preserve it? Pablo Chiereghin interferes with the (moral) laws between private and public spheres in order to cause irritation in the urban context. Hana Usui devotes herself to the macabre limits of nuclear ‘death zones’ and the people who cross them time and again out of love for their country.

Pablo Chiereghin is an Italian artist living and working in Vienna. He works with site-specific projects based on social and political dynamics. His actions, performances, and interventions take place in reality. His practice finds fertile ground where behaviours and rules cause entropy and discrepancies. Pablo Chiereghin has appeared at, among other places, andata.ritorno Gallery in Geneva, CCC Strozzina in Florence, das weisse haus in Vienna, Galerie Laurence Bernard in Geneva, Kunst Haus Wien, Künstlerhaus in Vienna, Kunstraum Nieder- Oesterreich in Vienna, Micamera Gallery in Milan, the National Archaeological Museum of Adria, and Trieste Contemporanea. www.pablochiereghin.com

Guido Kucsko is an Austrian conceptual artist and lawyer living and working in Vienna. As a lawyer, he specialises in intellectual property law, a subject he also teaches as an honorary professor at the University of Vienna; in his work as an artist, he concentrates on the principal issues of thought, feeling, and creative action. His mostly site-specific installations and photo and video works have been on view at, among other places, Albertina, Bank Austria Kunstforum – Tresor, and the Sigmund Freud Museum in Vienna. Guido Kucsko is represented by Galerie Ulysses, Vienna. www.kucsko.com

Esther Stocker is an Italian artist living and working in Vienna. Horizontal, vertical, and diagonal lines and a palette reduced to black, white, and grey form the basis of Esther Stocker’s grid structures. No matter whether she creates (wall) paintings, objects, room-size installations, photographs, or videos, the artist is always interested in breaking up the laws of Euclidean space and the patterns of perception involved. Venues for her solo shows include CCNOA – Center for Contemporary Non-Objective Art in Brussels, MACRO – Museo d’Arte Contemporanea Roma, mumok – Museum Moderner Kunst Stiftung Ludwig Wien, and Museum Ritter in Waldenbuch. Further venues for group shows include 21er Haus in Vienna, Kunsthalle Krems, Kunstmuseum Stuttgart, Ludwig Forum in Aachen, Moravian Gallery in Brno, MUSEION in Bolzano/Bozen, Museum Liaunig in Neuhaus (permanent installation), Secession in Vienna, and the Vasarely Museum in Budapest. Esther Stocker is represented by Krobath Wien. www.estherstocker.net

Hana Usui is a Japanese artist living and working in Vienna. Her abstract drawings are made of black or white oil paint, which she carves into paper with a screwdriver and often embeds into ink washes. Her works have been shown at, among other places, Biennial of Drawing Rimini, Collection of Prints, Drawings and Photographs of the Staatliche Kunstsammlungen Dresden, Drawing Now Paris, Kunst Haus Wien – Garage, Manggha Museum in Cracow, Museum of Prints and Drawings of the Staatliche Museen zu Berlin, Seoul Arts Center, and Tokyo Metropolitan Art Museum. Hana Usui is represented by Galerie Dittmar, Berlin. www.hana-usui.net