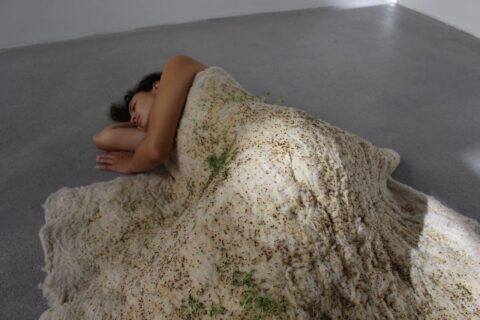 PARTY OF A LIFETIME by Paula Flores
curated by Marcello Farabegoli

A project in cooperation with Sammlung Friedrichshof STADTRAUM sponsored by the City of Vienna (MA7) and from the cultural budget of the Neubau district. With the kind support of FELLER Power Cords

Paula Flores was born in 1988 in Tijuana / Mexico. She studied from 2010 to 2015 at the Universidad Autónoma de Baja California / México, where she received a Bachelor's degree in Plastic Arts. In 2018 she came to Vienna, where in 2021 she obtained a Master's degree in Art & Science at the University of Applied Arts Vienna / Austria. It is remarkable that, contrary to the mainstream in Mexico, she dedicated herself to abstract-gestural art at a very young age and thus faced strong headwinds at the Mexican university, which offered a classical-figurative education. Stylistically she was influenced also by the “Exvotos Mexicanos” (Mexican votive offerings are representations of popular art) and the “Rótulos Mexicanos” (hand-painted commercial posters full of color and ingenuity in which images coexist with varied typographies). She gradually began to explore the roots of her family – her grandparents, who had a close relationship with nature, play an essential role – her culture in general (festivities, rituals, etc.), especially the pre-Colonial ones, and her relationship with nature. Along the way she also encountered the world of shamanism, especially Maria Sabina, who revealed to the western world the miraculous power of some mushrooms. So Flores began to study the mysterious world of mushrooms and other living beings like bacteria and some plants, topics that she then deepened at the University of Applied Arts in Vienna. Thus she developed her own painterly style, a mix of abstract-gestural painting and supposedly naïve or symbolic drawings, which, due to the joyful colorfulness, appear Mexican or South American to Western eyes. At the same time, when you see her sculptures made of mycelia, her actions/performances, and videos, you also recognize another enigmatic side of the artist, which cannot be pigeonholed into a particular subject, ethnic group, etc., which is about deep questions about our existence, our relationship to nature and the universe.

In general, Paula Flores is concerned with the complexity of nature, with our knowledge or ignorance of it and our relationship to it. How is it possible, the artist wonders, that Western capitalist-imperialist thought, conceived predominantly by men, has enabled a part of humanity to legitimize the exploitation of enslaved and oppressed populations and groups of people, and nature no less?
Thus, Flores seeks ways to change, dismantle, and overcome these hierarchical conceptual constructs that can limit us in the understanding that we may have of the natural interconnectedness of the world. To do so, she is studying extraordinary ways of communication between humans and other species, such as fungi, bacteria, and plants. In this context Flores is very interested in symbiogenesis1: in the biological world symbiogenesis is when two or more different organisms live in close physical contact – It brings together unlike individuals to make larger, more complex entities i.e lichen. She hopes that symbiogenesis could lead to a shift in the balance of power and possibly pave the way for a more balanced relationship between humans and nature that would benefit the entire planet.
On the other hand, Flores is interested in the duality between life and death and questions where the sharp boundary between these concepts might be found. Regarding this fundamental contrast, it should be mentioned that the famous Austrian physicist Erwin Schrödinger, with his legendary essay "What is Life" published about seventy years ago, had pointed out the great riddles of the phenomenon of life as well as the associated principal explanatory hurdles, and at the same time had given an essential impulse to genetics. Remarkably, the current state of knowledge is still not sufficient to understand how life arose. Likewise, it is still technically impossible at present to create artificial life. Last but not least, a virus, i.e. a being which exists as such by definition between life and death, plays a generally known frightening role in the last time.
On what seems another side of the spectrum, in so-called animistic religions, for example, a personal soul is attributed to any natural object. Especially in their youth, some people today may still have the ability to feel this all-soul; some artists in particular often cultivate this ability throughout their lives. In her childhood, Flores herself was able to cherish a “magical feeling” concerning nature and recognized this particular effect even more intensely in the stories of her grandparents who grew up in the countryside versus her who grew up in the most active border in the world. Flores' will to find a way of transformation by means of explorative-artistic work, which is to break through the dual concept of life and death, to explore what is in between could seem to be particularly radical. Last but not least, she believes that through this she can attain a connection to beings that animate the universe.

The exhibition at Kunstraum Feller in Vienna is divided into two rooms: one room with the installation "PARTY OF A LIFETIME" and another room with works mainly from 2022 that are closely related to this installation, as well as a few works from 2019 and 2020.

The installation which consists of several paintings and sculptural components is a tribute to the aspects of nature that Paula Flores grew up in, the stories that her grandparents talked about, and the festivities from her home country that celebrate nature on its own and humans' relationship with nature. The idea was born from the thoughts of Flores's grandfather who grew up in the rural area of Los Altos de Jalisco / México. When he was only six years old due to family circumstances sometimes he wander off alone into the mountains near his town. He took a kilo of tortillas with him and loved to hunt and grab from the ground the fallen fruits that generous nature gave. He slept on the ground accompanied by the stars that gave him plenty to think about and enjoyed the freedom. On the other hand, it was Flores's grandmother who talked about the magical aspects that were hidden within nature and the powerful connections to their ancestors, which must be kept alive by paying tributes, speaking to them, and having them always present in their lives and never stop being amazed by their wonders... the grandmother also taught her the festivities2, from catholic/indigenous celebrations, rights of passage and tributes to secret playful spirits that lived in nature.
After several years of living in Vienna, the Mexican artist started to feel painfully distant from all of this, not just because of the physical distance, but because she started to change herself. Even if, for example, nature in Austria is also beautiful, she cannot create this inner connection with her like in Mexico. And she misses home also because of the lack of meaningful festivities to her. So the artist herself: “If we are not here to appreciate the beauty of life (birth), growing up, changing, energies we can’t see but can be interacted with and death then what are we here for? In these very diverse festivities from mestizo to indigenous practices, I find a mirror. A mirror that reflects how we relate to nature, how it is represented and intertwined in our daily life, scheduled festivities, spontaneous and sporadic rituals, parties, gatherings, veladas, etc… This is how we bring nature into our mind and into our soul. This is how we keep it alive.”

A small but important part of this installation are the sculptures “Mediation” (2021) made from the mycelia of mushrooms. According to Wikipedia, in common parlance, only the visible fruiting bodies are referred to as mushrooms. The actual fungus, however, is predominantly the fine, thread-like structure (hyphae) of existing mycelium in the soil or in the wood, which is mostly not perceived because of its occurrence in these opaque substrates. Fungal mycelia can grow to a size of over a square kilometer, have a huge biological mass, and have an old age. Mycelia are vital in terrestrial and aquatic ecosystems for their role in the decomposition of plant material and are the primary factor in a plant's health, nutrient intake, growth, and fitness. Flores has been experimenting with mycelia for a long time to specifically grow them into compact shapes and then let them dry out, whereby in most cases this process also means the death of these living beings. The sculptures seem somehow like prehistoric eggs, which could have come from dinosaurs or are even of extraterrestrial origin. When you take them in hand, you notice how light and fragile these filaments that have grown together are.
By bringing or forcing a hidden, essential living being so radically to light, so to speak, through her artwork the artist intends to investigate and possibly rediscover and present what a fine, immense network of hidden correlations may exist. To achieve this goal duality must be overcome in favor of diversity (probably a shift from the dual-logic to many-valued logic is needed). Without wanting to mystify physics, one can learn from relativity and quantum physics (i.e. the superposition principle) that matter and energy, particles and waves, and space and time are densely intertwined. The paradigm shift that has occurred from classical physics to quantum physics is finally beginning to take place in biology and medicine. It seems that the boundaries between the tangible and intangible are no longer so clearly defined.
Marcello Farabegoli
(not-final text version)