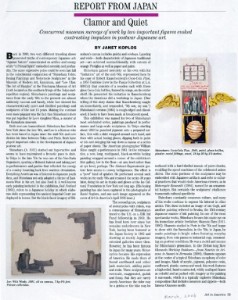 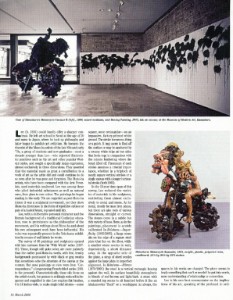 Report from Japan: Clamor and Quiet
by Janet Koplos

Back in 1990, two very different travelling shows presented truths of contemporary Japanese art: "Against Nature" concentrated on artifice and energy while "A Primal Spirit" embodied serenity and profundity. The same expressive poles could be seen last fall in the coincidental conjunction of "Shinohara Ushio: Boxing Paintings and Motorcycle Sculptures" at the Museum of Modern Art, Kamakura, and "Lee Ufan: The Art of Margins" at the Yokohama Museum of Art (both located on the southern fringe of the Tokyo metropolitan region). Shinohara's paintings and sculptures from the early '60s to the present are almost uniformly raucous and bawdy, while Lee showed his characteristically quiet and distilled paintings and sculptures of the last 15 years. Making the contrast even more piquant was the fact that Shinohara's show was put together by Lee's daughter Mina, a curator at the Kamakura museum. Both men are transcultural: Shinohara has lived in New York since the late '60s, and Lee is a Korean who has been based in Japan since the mid-'50s and now divides his time between Tokyo and Paris. Both have played important roles in the development of Japan's postwar art.

Shinohara, one of the Neo-Dada Organizers, once sported a Mohawk and took part in performances. Lee has a Confucian education, studied philosophy and wrote seminal art criticism.

Shinohara (b. 1932) started out hyperactive and seems to have maintained a frenetic pace to date. In Tokyo in the late '50s he was one of the Neo-Dada Organizers, sporting a Mohawk haircut and taking part in performances and parties that reflected the energy of a country bouncing back from wartime devastation. Everything American was of interest to Japanese youth then, and Shinohara not only adopted a theme of East-meets-West in his art, but also lived it. A well-known early painting included in the exhibition, Doll Festival (1966), refers to a Japanese holiday in which elaborate dolls representing the ancient Imperial Court are displayed in homes. But the blank-faced imagery of Shinohara's canvas includes geisha and cowboys. Layering and voids—both characteristic of Japanese traditional art—are achieved nontraditionally, with cutouts of orange Plexiglas as well as paper and paint.
Shinohara gained notoriety on his own with his "Imitation" art of the mid-'60s, represented here by his copy of Robert Rauschenberg's Coca-Cola Plan, a 1958 Combine (now in the Panza Collection at LA MOCA) that consists of a wooden rack with three glass Coca-Cola bottles, framed by wings, on its center shelf. He presented his Imitation to Rauschenberg when the American did a workshop in Japan. (One telling of the story claims that Rauschenberg caught on immediately, and responded, "My son, my son.") Shinohara's Version (1964) is rough-edged and discolored; it looks to have been made at breakneck speed.
This exhibition was named for two of Shinohara's most celebrated series, paintings produced in performance and large-scale sculptures. In Tokyo starting about 1960 he punched pigment onto a prepared surface, first with a shirt wrapped around each hand, and then with actual boxing gloves, dipping both in paint or ink and swinging his way down a canvas or a series of paper sheets. The American photographer William Kline caught a performance in 1961. In the retrospective, a new, long, multipanel, black-on-white boxing painting wrapped around a corner of the exhibition's first gallery, low to the floor—at arm level rather than at eye level, perhaps. The Abstract-Expressionist gesture here seems to convey belligerence. The effect is a "pow!" kind of splatter. He performed several such works in the early '60s and resumed the series 30 years later, doing his act in trunks and gloves at the Ise Cultural Foundation in New York not long ago. (His boxing painting has also been captured in the photographs of Kunie Sugiura, and one such image appeared on the cover Art in America's April 2002 issue.)
The second genre, sculptures of motorcycles with riders, was a consequence of Shinohara's travel to the U.S. on a JDR 3 rd Fund fellowship in 1969. He has lived here ever since but remains under known in New York, having been featured at the Japan Society in 1982 and showing at mostly Japanese oriented galleries since then. However, he has been famous in Japan for many years. Motorcycles became his expression of America. He made them of found cardboard and other junk materials, adding paint and resin. These sculptures are overscale, exaggerated, garish and funny. But they are rarely purely American: the rider may be a geisha or the bike may be surfaced with a hard-shelled mosaic of paint chunks, recalling the speed machines of the celebrated anime Akira. The resin portions of the sculptures may be embedded with Japanese artifacts and refer to cultural practices that would elude American viewers, as in Motorcycle Kanzashi (1984), named for an ornamental hairpin. But certainly the sculptures' ebullience transcends cultural specificity. Shinohara constantly consumes culture, and many of his works continue to express his interest in other artists. This show included an image of van Gogh, and another painting referred to Sesshu, the 15 th century Japanese master of ink painting. In one of the most spectacular works,
Shinohara focuses his manic eye on his immediate artistic forefather, Okamoto Taro (1911-1996). Okamoto studied in Paris in the '30s and began to show with the Surrealists; in the '50s, in Japan, he made paintings in bright colors featuring everyday imagery, from coin purses to industrial cogs, commenting on postwar conditions. He was a model and mentor for Shinohara's generation. In the 26-foot-long Taro Okamoto Working Outdoors—from Sunrise in Arizona to Sunset in Bermuda (2000), Okamoto Appears at the center of a typical Shinohara cacophony of color and Images. Made of acrylic, pigment, polyester resin, cardboard, plastic, canvas and wood, this work features a high-relief, hand-constructed, wildly scalloped frame as colourful and as packed with imagery as the painting it surrounds, which is a typically explosive Shinohara composition that includes monsters and zippers—both famous Okamoto motifs.

So there it is: a Japanese artist in America, a Korean artist in Japan or France, both seeing from the distance experienced by expatriates. Shinohara speaks in the harried language of manga and pachinko, Lee with the calm of gardens or the shore. Both manipulate their mediums to create their own distinctive resonances.

"Shinohara Ushio: Boxing Paintings and Motorcycle Sculptures," curated by Lee Mina, was on view at the Museum of Modern Art, Kamakura and Hayama [Sept. 17-Nov. 6, 2005].
"Lee Ufan: The Art of Margins" curated by Kashiwagi Tomoh and Kuraishi Shino, was shown at the Yokohama Museum of Art [Sept. 17-Dec. 23, 2005].
Both were accompanied by bilingual catalogues.